There are a number of reasons why people suffer from receding gums. And although generally everybody’s attention is on their teeth, the gums play a key role for them, too. After all, what good is there to have white teeth if there is nowhere to su pport them on?

We will be talking about receding gums in this article, mainly the role that gums play, why they can recede and what you can do to improve that. Hopefully this information will prove useful to you!

Why are gums so important? 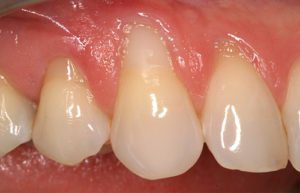 It is the gums’ job to keep your teeth in place. This is done by wrapping around them and keeping them from shifting. For this reason, it is normal that whenever a patient has lost too much gum tissue or the gums recede, a number of problems arise.

For example, gums that have receded too much may expose the root of the tooth, which is only protected by cementum. Cementum works like tooth enamel in protecting the inside, but it is far weaker in comparison. By having your root exposed, plaque can easily get to the root and not only cause pain, but tooth sensitivity.

There are a handful things that can trigger this, so here you have some of the reasons listed. Perhaps you can relate to some of them and put you in action: Tips to keep your gums healthy

Keeping good oral habits proves important at the moment to avoid further complications. Even more so because in the case of gum disease, it is essentially painless, so most people overlook it.

For you to keep healthy gums, make sure to have a top notch brushing technique:

If you have any issues or are seeking cheap treatments with the best dentist, consider contacting us to get the best prices here in Los Algodones, Mexico.

Dental Plaque And How To Avoid It

Got something to say? Cancel reply